If you were picking the perfect time to job search, you probably wouldn’t choose a pandemic. But of course, the choice of timing isn’t always left to the job seeker. Training programs, job loss, family issues—any number of circumstances can fuel the decision to find new work, pandemic or no.

Here are two stories of neurologists who dived into the job market during the first year of COVID-19, and their job search experiences.

When Dr. Abigail Chua and her husband Brennan got pregnant with their first child in the fall of 2019, it crossed their minds that job changes might make sense. Living almost five hours from the nearest family meant they would be on their own for the inevitable day care juggle faced by two-career parents. But each was enjoying their job, he as a home-visit occupational therapist, and Chua as a headache specialist and program director for a headache medicine fellowship program with Hartford Health Care Headache Center in Connecticut. Almost half-heartedly, she says, Chua started reviewing job postings and going on interviews over the winter.

And then COVID-19 hit. At first, the impact on her decision-making wasn’t acute. In February of 2020, Chua remembers elbow-bumping, instead of handshaking, with interviewers, but she didn’t seriously consider not traveling for in-person meetings. With some head-shaking hindsight, she now recalls dinner with one interview team inside a restaurant with the tables spread far apart, but of course, no facemasks.

By March, the situation was starting to feel very real for Chua and her husband. “He had a tougher decision than I did,” she notes. “I was due to give birth in April and I was terrified about him going into peoples’ homes and bringing something back to me or getting sick himself. He actually resigned his job so he could be home with me and the baby.”

As she realized how deeply COVID-19 could restrict their ability to visit family with their newborn, or to even secure childcare, Chua accelerated the pace of her search. “I interviewed with four places altogether,” she says. “I think the first one was just me dabbling but as I got more pregnant and COVID-19 was kicking in, it became a bit more rushed.” She then turned down the opportunity for additional interviews, feeling increasingly stressed by the in-person contact and the travel. And virtual interviews didn’t appeal because she wanted to see the people and “get the vibe of the place.”

Fortunately, one of the four places she did visit for interviews was the one she wanted to work at: Geisinger Health System in Wilkes Barre, Pennsylvania. The offer came in the nick of time: “I was given an offer in late March or early April, just before I had my daughter,” Chua says. Which means that she was visibly pregnant in the interviews? “Oh, very visibly and horribly, uncomfortably pregnant,” she laughs. “I’m 4’ 11” so I was wearing maternity clothes in my third month. My baby was over eight pounds, so I was very, very round when I walked into those interviews.”

While none of the interviewers she met during her search were put off by her pregnancy, Chua says the department that she joined was the most supportive of all. Since it was a two-day interview process, they had time to buy gifts for the baby, which they presented to her on the second day—even though they hadn’t made an offer yet. Ironically, this was an organization Chua says she might not have considered as seriously, since they are 90 minutes from her family and she had an offer that was closer. But their support, coupled with the encouragement of Hannah Watene, her recruiter from Rosman Search, made the choice more clear.

In fact, Chua says, using a recruiter was probably the best thing she could have done to facilitate her search during such uncertain times. “I honestly don’t think I would have had the energy to do all this on my own. She told me about opportunities she knew I would be interested in, and she kept in mind that my primary goal was to be close to family. She was wonderful.”

Having finished working for her former employer in November 2020 before relocating with her husband, Chua officially joined her new department in January 2021—just about a year from when she started searching in earnest. It wasn’t the year she expected to have, but she’s pleased nonetheless. “All in all, I think despite of COVID-19, my life changed for the better,” she says—something she probably wouldn’t have imagined saying when she first bumped elbows with interviewers.

If there’s one thing Dr. Deborah Boland has learned to do in her life, it’s pivot—a skill that came in handy when COVID-19 reared its head. She grew up in New England with entrepreneurs on both sides of her family but started her career in Los Angeles where she worked as a physical therapist for 10 years. As a self-described “single girl, doing whatever I wanted in life,” she didn’t have many restrictions on her time or activities. But she started to feel restless as she realized she wanted to do more for her patients, especially those with Parkinson’s and other movement disorders. The solution? Medical school and residency—in the Midwest, a long distance from the coast for an “ocean person,” but the perfect place to adopt two children, which she did. A fellowship in movement disorders at Duke University Medical Center followed, along with jobs in Georgia and Florida.

Which brings us to 2017, when Boland couldn’t ignore her entrepreneurial side any longer. Having resigned her position the year before to focus attention on issues her daughter was facing (she was later diagnosed as having special needs), Boland wanted work that would fit better with her family. Recognizing a need in the movement disorders community for home health options, she created Be Mobile Neurology as a mobile practice, and successfully served patients in the Tampa Bay area until COVID-19 made her health care delivery model impossible. Despite having been named Physician of the Year in 2019 by her local medical association, Boland couldn’t maintain the momentum she’d been building. “It was meeting needs, it wasn’t being done anywhere in the country, and we were doing really cool things,” she says. “But all the great things I was doing weren’t enough when COVID-19 hit. It came down to a financial decision because as a single mom with two kids, I couldn’t make it work anymore.”

It was time for another pivot—but with even more strategy than before. She wanted to work for a health system that would recognize and honor her responsibilities as a parent while also allowing her to serve patients fully—and it had to be relatively close to Tampa, where her family had located since her initial move there. A tall order in the middle of a pandemic, but she had to try.

In July of 2020, after watching the job postings for awhile, she called Andy Fadenholz, a neurology recruiter for Rosman Search and explained her criteria, which was firm. Which is one reason she was so hesitant in August when she found herself on a plane to Pensacola, more than six hours north of Tampa. “I thought, ‘Why am I flying over here?’” she recalls. “Basically, it was to get Andy off my back. He kept insisting I needed to go and I wanted to keep him as a friend because I needed his help. So, I went.”

Her recruiter had a good instinct about the match with Sacred Heart Hospital, but even he couldn’t have predicted how well the situation would suit her. “I walked into that clinic and I knew from the first moment that it was different from other places,” she says. “As the interview day progressed, the boxes on my criteria list for a new Movement Disorder Specialist employed position continued to be checked off with Sacred Heart and it became very apparent this would be a good career move for me.  Things like collegiality, a community need for my services, resources available to build and support my subspecialty, were all there with Sacred Heart.  But the question remained would it be a good fit for my family? The first thing the CMO said was, ‘What can we do to get you here?’” Boland uncharacteristically laying all her cards on the table let him know that professionally Sacred Heart seemed like exactly what she was looking for professionally, however, “I then blurted out that I could never move to a community that didn’t have the resources to meet my daughter’s needs, and he said, ‘Have you seen what we have here?’”

To her surprise, Boland discovered Pensacola had exactly the programs she’d been dreaming about for her daughter, which she had been struggling to create piece by piece while living in Tampa. Even so, she didn’t want to accept the first position she found without making comparisons. Despite the potential for complications presented by COVID-19, she completed interviews with other organizations before returning for a second interview with Sacred Heart in November 2020. “By then the extra interviews I’d had elsewhere had helped solidify my decision with Sacred Heart,” she notes. “Even when you know what you want, I think it’s important to explore enough options to give you peace of mind.”

Boland moved her family in December and started her new role in February 2021, as a movement disorders specialist charged with building the deep brain stimulator program. Overall, she says, COVID-19 didn’t really impact the search process, although it was definitely the catalyst for the initial decisions she made to seek employment.

Advice for Your COVID-era Job Search

If you find yourself job searching during the pandemic like Chua and Boland, there’s no need to panic. Although some processes may be different—such as virtual interviews instead of in-person meetings—you can still create a successful transition for yourself. One step that both doctors took was to engage the help of a recruiter. As Chua notes, “Working with a recruiter made the whole process very easy for me, and almost seamless. In one case, I didn’t get an itinerary for the interviews and she immediately contacted them and took care of that for me. She was just really helpful.”

Boland also emphasizes the importance of making comparisons between different employers, just as you would during non-pandemic times. In her case, she found that some hospital systems seemed to be struggling more than others, having already made cuts to the staff or salaries. This helped confirm her decision with Sacred Heart, which is part of a national group that has not made those cuts.

Not surprisingly, both doctors advise choosing employment that supports your family life. While acknowledging that you might have to “cast a wide net” or go outside of your comfort zone, Chua believes the pandemic creates the imperative to be more introspective about personal goals. “Times have changed,” she notes. “You have to take a step back now to say, ultimately, what’s important to your life. Then make your job fit that.” That sounds like good advice in any time. 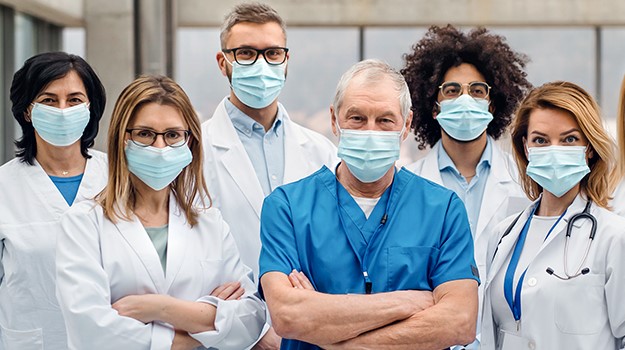 Making a Career Change During a Pandemic